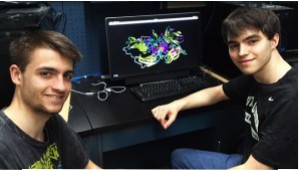 With nearly 10,000 attendees, the March 2016 meeting of the American Physical Society attracted some of the top physicists and researchers to Baltimore to share groundbreaking research initiatives from various industries, universities, and labs around the world.

Two Rutgers University–Camden undergraduate students were invited to be among them.

Not many second year undergraduate students command the attention of such a prestigious audience, but that’s exactly what Cooper and Dmitriy Prokopovich, a sophomore majoring in biophysics at Rutgers–Camden, did after submitting their research abstracts to conference organizers.

The two Gibbsboro residents and Eastern Regional High School graduates presented their own original research at the event, which took place from March 14 to 18 at the Baltimore Convention Center.

“I felt inspired because of the depth of the presentations, and I felt inspired to really try and go out and learn more,” Cooper says of being among such exclusive company.

The two Rutgers–Camden researchers were invited to the conference to present the work they are doing under the supervision of Luca Larini, an assistant professor of physics at Rutgers–Camden.

Prokopovich presented his research on tau proteins — found in the central nervous system and related to Alzheimer’s disease and Parkinson’s disease — during a poster session at the conference.

Meanwhile, Cooper delivered a talk to an audience of physics faculty members and graduate students that focused on his work exploring the inhibition of enzymes.

“I think more than anything, it gave me a lot of confidence,” Prokopovich says. “It’s a pretty good feeling and the biggest thing I got out of it was the level of focus and dedication I’ll need to keep going to succeed in the field.”

Both students, who are members of the Rutgers–Camden Honors College and who have been friends since the fifth grade, say doing research at Rutgers–Camden has been an invaluable experience. Both want to continue to do research in graduate school, and they’ve also been invited to present their research at a meeting of the American Chemical Society in Portland, Ore. in June.

“Research is a major component of our education as a whole, and we’re both excited to continue down that path,” Cooper says.